This is a story of the power of motherhood and our ability to come together in scary and tough situations.

For me, in the first couple of years of motherhood, the “village” seemed like a complete myth. Though that has changed now, what I am about to describe has completely renewed my faith and passion in the power and ability of moms in tough situations to bond and care for one another in their most scary and vulnerable of times.

My baby turned two in February. Around that time, I started to notice that her breathing was labored. Snoring, which had been happening since she was a tiny girl, was growing worse. I laid awake at night listening to the monitor, to the point I was anxiously waiting for her to take a breath and taking a sigh of relief myself once she finally took in air.

To put it shortly, my little girl had sleep apnea caused by gigantic tonsils and adenoids, with adenoids blocking most of her airway. Thankfully, we found an amazing doc, and the “fix” was to be quick and relatively simple.

Once the surgery was scheduled, I anxiously wondered if we were doing the right thing for her. She didn’t have the ability to make decisions for her body and health – it was all on our shoulders. However, I feared for what would happen if we didn’t help her. 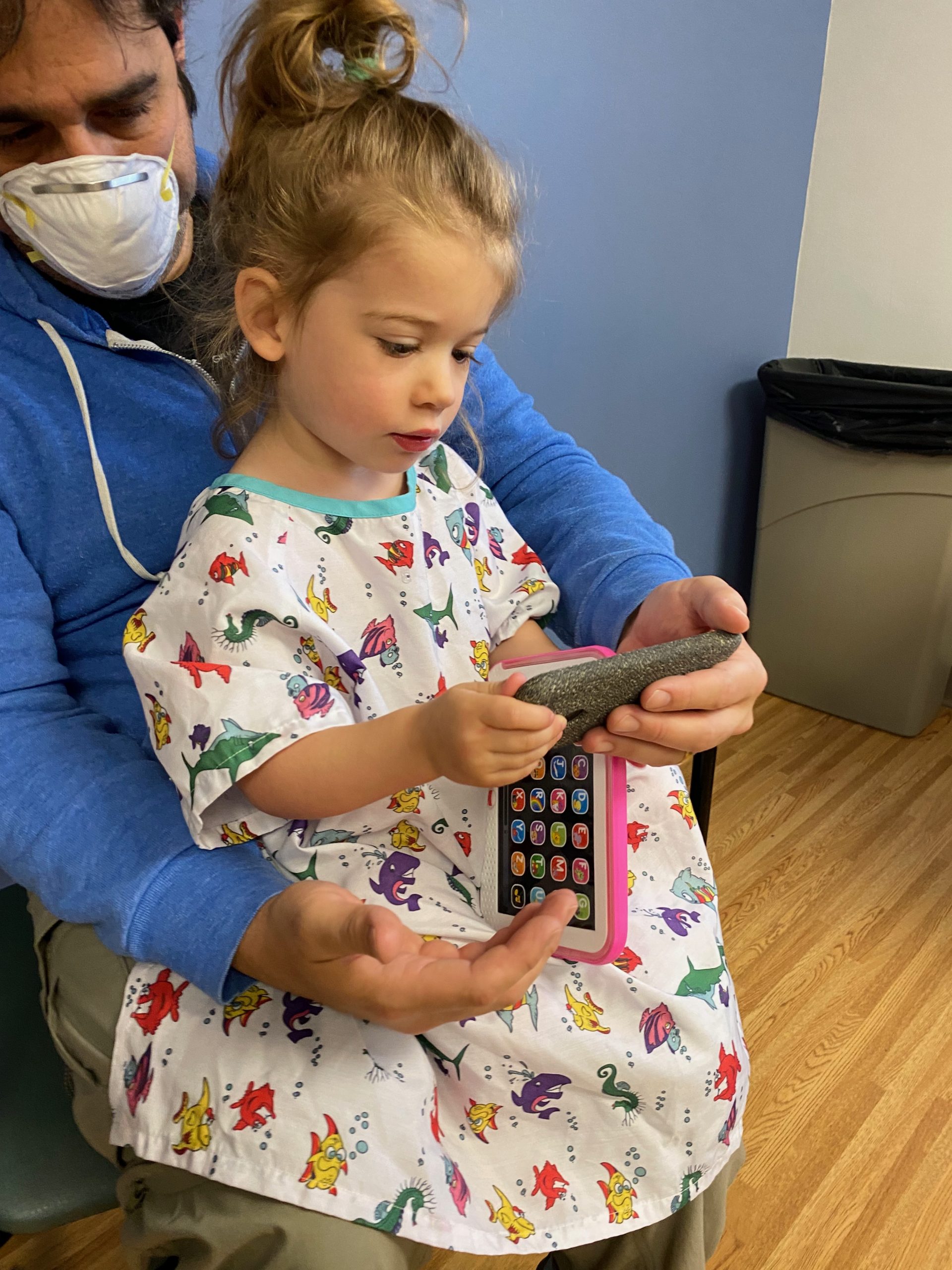 Hanging out with Daddy before going back for surgery.

The big day came quickly and she was first up for the day. She was in and out in 20 minutes, though the time felt like an eternity. Due to her age, we needed to stay overnight.

When we arrived on the pediatric floor, I realized we would be sharing a room. A fellow Mama was in there with her little guy, who I learned was only 6 months old. I immediately felt terrible for the cries and screaming I knew would be coming from my little lady, as well as the three-hour round-the-clock meds.

Only one parent was permitted to stay the night. When my husband left, I was so scared of what was to come and how we would make it. She had already tried to rip out her IV, which we ultimately decided with nursing approval to remove. She was refusing meds. She was in pain and tired, and I felt helpless as her source of comfort. 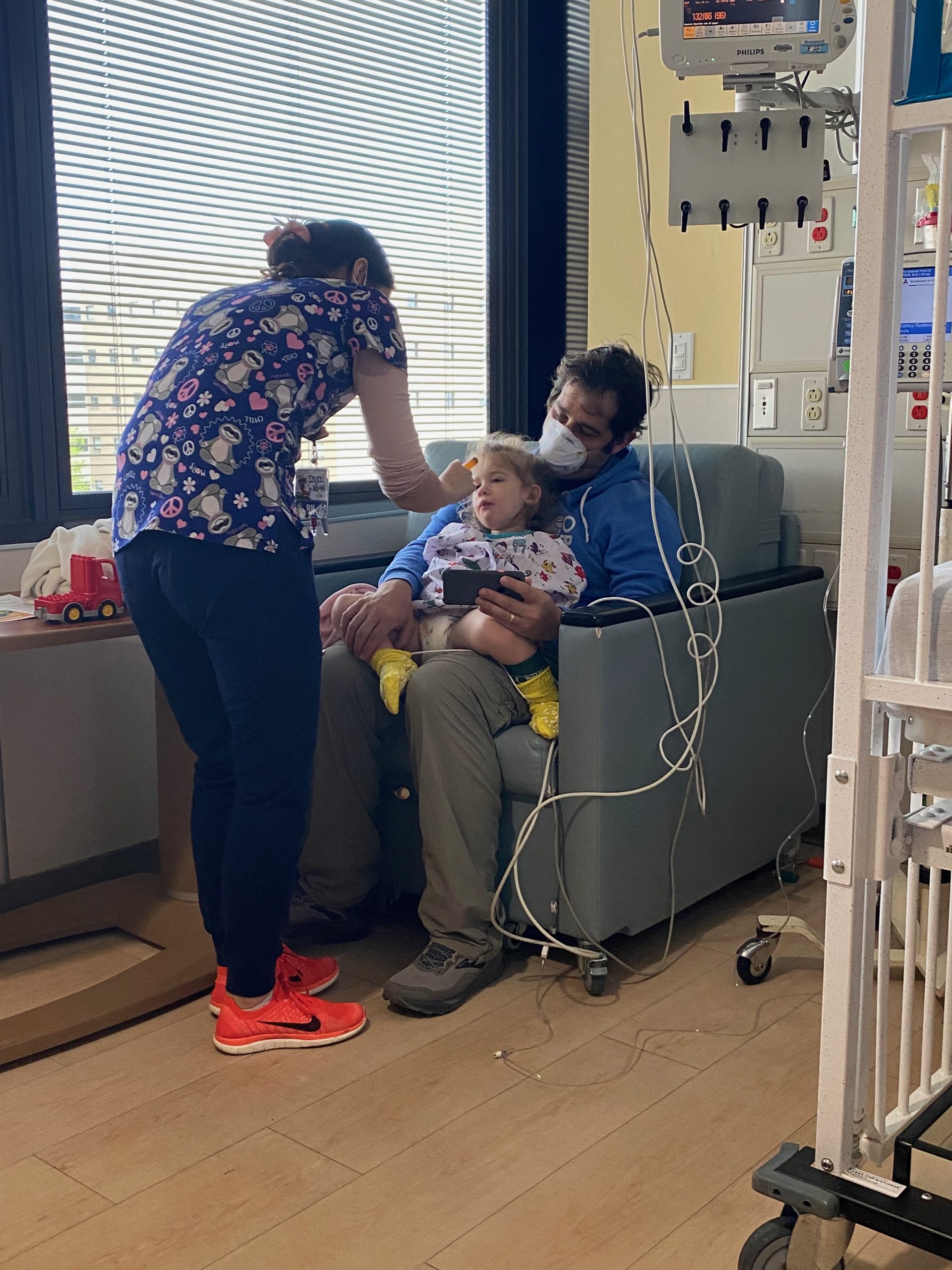 Thank you, nurses, for all you do. Our little lady did not want any part of being hooked up.

In my tip-toeing to the bathroom, which was on the side of my Mama-roomie and her little guy, I was apologetic and probably extremely awkward. He was peaceful, quiet, and beyond sweet. I could sense they were both tired, scared, and ready to go home after a journey that sounded long and arduous. She kindly reassured me that it was okay. Though it seemed as though her husband may stay the night instead of her, the stars aligned and she stayed with me. We were on the same 3-hour schedule throughout the night. I never felt alone, even without my husband. We slept on pull-out chairs, checked on each other, and offered water refills and coffee. Though I had never met this woman in my life, I felt like we were in this together and felt so much comfort, reassurance, and power in her simply being there on the other side of the curtain.

This was my biggest takehome from this experience: I didn’t care what her views were on parenting, whether her kids were slide climbers or only slide go-er downers, how she fed her kids, whether she slept trained or co-slept – none of it. All I cared about was having another powerful and strong woman in a scary and unknown situation – and she was supportive, vulnerable, and above all, KIND. 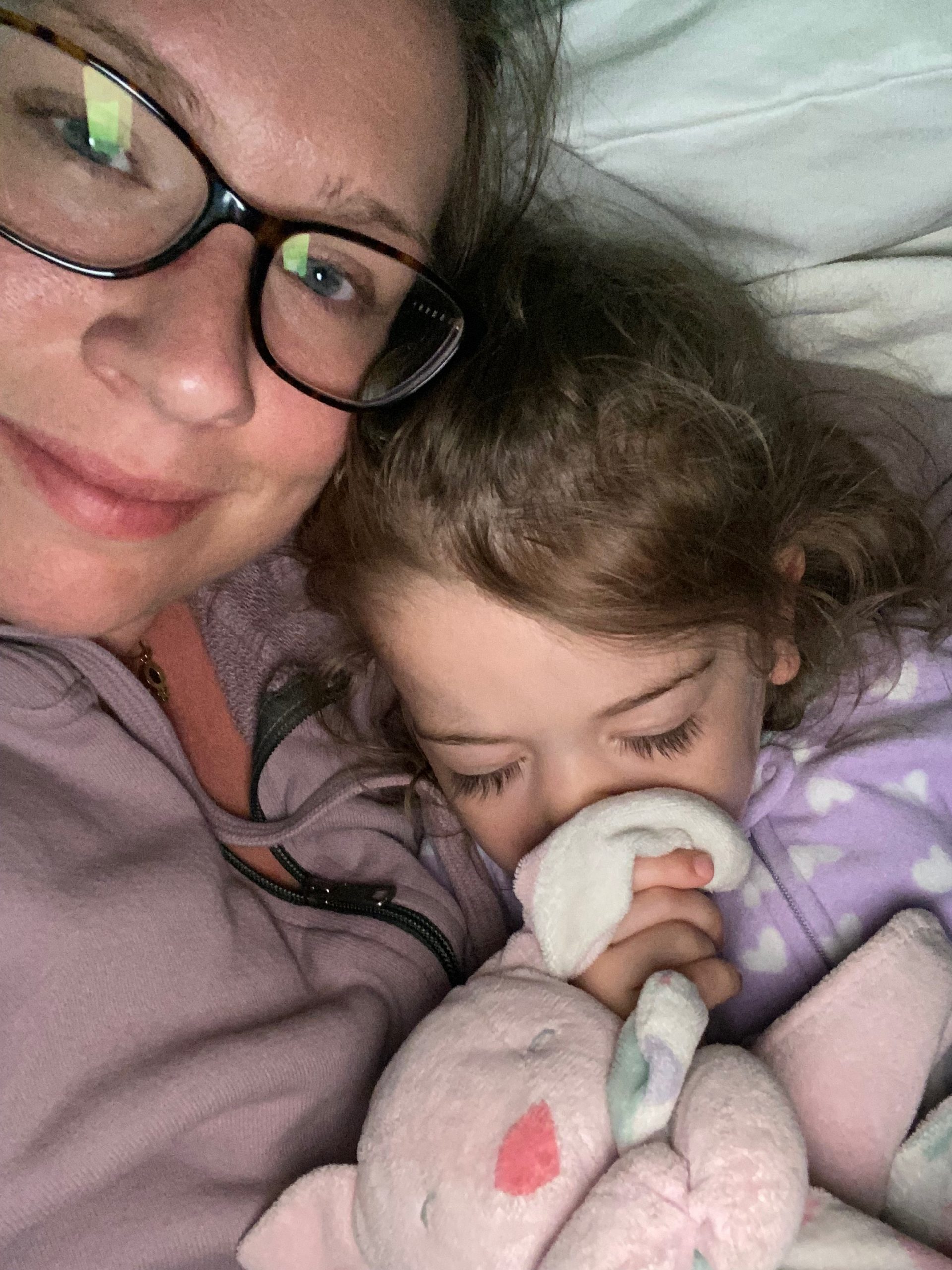 Before the start of a very long night.

Unfortunately, they were not able to leave the next morning as planned, as we did. Privacy is difficult when a thin curtain is all that is separating you. I didn’t want to be obvious, but I hugged her and cried with her, and told her how sorry I was on our way out. To snotty cry with someone you’ve known for 20 hours is extremely powerful. I wish now I would have gotten her contact information, but if she sees this, May 19th into May 20th was one of my hardest days thus far and your love pulled me through and gave me strength and power for her recovery journey moving forward.

At the end of the day, this was a simple, routine surgery that has drastically improved my little girl’s quality of life. While going through the two-week LONG recovery was tough on her, and us, the outcome was so worth it.

Most of all, it renewed my faith in the power of mamas, and how we can construct an immediate village in the most challenging of times. 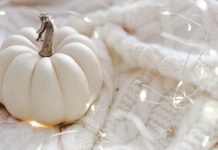 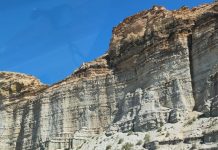 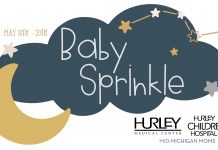